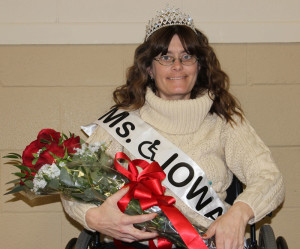 Iowa’s new advocate for people with disabilities was crowned in Iowa City over the weekend at the Ms. Wheelchair Iowa pageant.

Pattie Duff, of Des Moines, is a mother of four and a student at Grand View University. Duff has degrees in human services and psychology and is working toward a degree in special education. She would like to teach special ed students at the kindergarten level.

“A lot of people think that people with disabilities don’t do everything everybody else does,” Duff says. “Well, if I can teach the kids in my classroom that it’s okay to be disabled and that you can do everything everybody else does but in a different way, then maybe it will change people’s minds as they get older.” Duff has been in a wheelchair nearly three years following a spinal cord injury. She’ll represent Iowa at the national Ms. Wheelchair America pageant this summer.

“My platform is going to be about foster parenting for those in wheelchairs because I have a foster daughter that’s two-and-a-half months old,” Duff says. “I love her to death. She’s a really good baby. I actually have three kids of my own so it’s not really any different.” While Duff uses a wheelchair to get around, she doesn’t let it stop her from pursuing anything she wants.

“I am very active,” Duff says. “I have climbed a rock wall, twice, clear to the top. I go go-carting and I have done the Dam to Dam twice.” That’s a half-marathon that’s held every summer in the Des Moines metro area where the 42-year-old Duff competed with her non-motorized wheelchair.

Her next goal is to compete in the Ms. Wheelchair America Pageant in Grand Rapids, Michigan, the week of August 8th through the 13th.