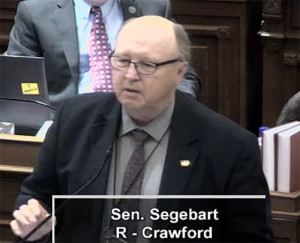 An event at the Vietnam War Memorial at the Iowa State Capitol today marked the first “Veterans Black Arm Band Day for PTSD” in remembrance of an Iowa veteran who died in a Des Moines park.

Senator Mark Segebart, a Republican from Vail, talked about the issue on the Senate floor. He read from the program for the event.

“Nothing has changed since PTSD combat veteran Richard Miles was laid to rest on March 23 — one year ago today. Today, the date of his birthday he would have been 42 years old,” Segebart read. “He froze to death in a public park as his PTSD terror worsened. Six years ago there were 90 psychiatric beds dedicated to veteran mental health in Iowa. Today there are just 10.”

Segebart says Miles joined the military after the September 11th attacks. “He served proudly and with distinction for four years, earning the Army Commendation Medal for Leadership and Duty During Combat Operations, the Army Commendation Medal for Leadership at Fort Riley, and a U.S. Army Good Conduct Medal for service from 2002-2005. And the Combat Action Badge from Operation Iraqi Freedom Two,” Segebart says.

Segebart read more about the event. “This ceremony today is to mourn those who have been left on the battlefield missing and unaccounted for in the eyes of their countrymen,” Segebart says, “those who will always see what we never see. Those with PTSD, TBI and MST. Richard Miles should not have died in vain.”

Segebart says 22 veterans take their own life every day in the United States. “That’s on every 65 minutes, which is very alarming,” Segebart says. He says the problem involves more than the veterans who most recently returned home. “The other part that I found interesting was that it spikes at age 60. What does that mean? It means that Vietnam veterans are the bulk of the suicides that are still going on,” Segebart explains. “So, you see how long PTSD can last in a veteran.”

Information from the organizers of Black Arm Band Day shows there are some 500,000 veterans in the U-S with PTSD, and at least 5,000 living in Iowa. The information also says there should be at least 1,500 psychiatric beds in a state the size of Iowa, but now there are likely fewer than 600.