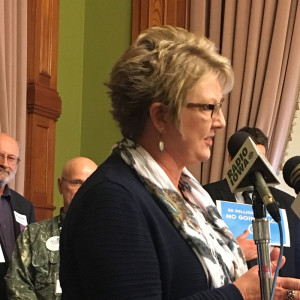 The event concluded with the singing of “Happy Birthday” and some in the group sang “ObamaCare” instead of the Affordable Care Act in the song’s next to last line.

Lisa Vetter of Red Oak has private insurance through the government exchange that was set up by the law.

“And I don’t call the Patient Protection and Affordable Care Act ObamaCare,” Vetter said. “And the reason why I don’t is because I like the fact that the first two words are patient protection.”

Vetter is a cancer survivor who saw her previous insurance policy cancelled at the end of 2013.

“The only reason why I was able to purchase insurance was because of the Patient Protection and Affordable Care Act,” Vetter said. 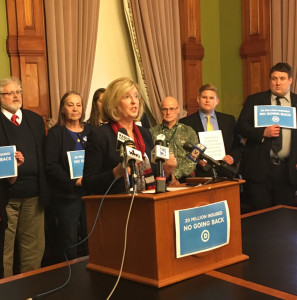 Iowa Democrats sang Happy Birthday for ObamaCare on its anniversary.

Officials say the law has protected more than 1.3 million Iowans like Vetter from coverage denials due to a pre-existing condition. Iowa Democratic Party chair Andy McGuire is also a medical doctor. She said getting more Iowans insured means they can avoid the emergency room and, instead, get regular care.

“As a doctor, you see nothing more important than preventive care,” McGuire said. “…If we keep someone healthy, if we catch illness early before it becomes worse or more expensive, that’s really what preventive care does.”

The Kaiser Family Foundation has been tracking public opinion of “ObamaCare” and polling earlier this month found 47 percent of Americans have an unfavorable view of the law. Democrats argue the law hasn’t grown more popular because Americans continue to see increases in their health insurance premiums. The Iowa Democratic Party’s chair said since the law passed, premium costs have risen at the slowest rate in 50 years, plus 20 million uninsured Americans have obtained health insurance coverage.