You are here: Home / Business / Iowa near the top in lease payment dollars for wind turbines 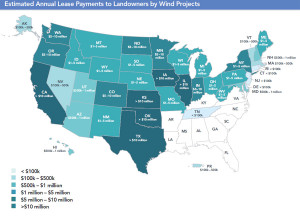 AWEA map of wind dollars paid in each state.

The American Wind Energy Association (AWEA) has released information showing Iowa ranks second in the nation for the amount of money paid to landowners for the placement of wind turbines.

AWEA’s Manager of Industry Data and Analysis, John Hensley, talks about the numbers.

“Across the United States there were more than $222 million paid in land-lease agreements to local land owners who had wind projects on their site,” Hensley says. “And Iowa is certainly near the top. We’re showing more than $10 million paid out on an annual basis to these landowners.”

Iowa is one of six states with more than $10 million in payment, with Texas ranked number one, followed by Iowa, California, Oklahoma, Illinois, and Kansas. AWEA figures show Iowa produced 31 percent of its electricity from wind last year. Hensley says the payments are kept confidential, but they have a good estimate of how much is being paid.

“They are generally designed similar to a royalty payment based on the output of the machine at the site. Or, it could also be based on just a raw capacity amount — so you’ve got a two megawatt turbine, and a two megawatt turbine pays out a certain amount per year. They are typically private negotiations and contract structures between the project developer and the land owner,” Hensley says. He says the revenue is important as about 70 percent of rural wind farms in the U.S. are located in low-income counties.

“I think this is a really important piece of that economic picture that really goes a long way to show the rural impacts that wind has across the country. We are looking at property tax revenues that can go a long way to help schools in those local areas,” Hensley says. Hensley says the payments are vital to many land owners as they help them make ends meet, and helps them keep the ranches and farms in the family.

AWEA will release more information on the impact of wind farms in its upcoming annual report — including job numbers, state-by-state comparisons, and the overall picture of the wind industry.