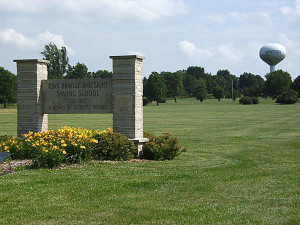 The campus for the state’s second-oldest educational institution may be adapted for a new mission.

The Iowa Braille and Sight-Saving School began operations in Vinton 154 years ago, but blind and visually-impaired students no longer live on the campus. Instructors now rotate around the state to work with students in their home school districts.

The AmeriCorps program has been using facilities on the campus, but Board of Regents president Bruce Rastetter says since the whole campus is not being “fully utilized,” there are discussions about what’s next.

“We’ve been in visits with the community because there are other uses for it, to make sure that campus stays intact,” Rastetter says. The main building on the Vinton campus was damaged by a tornado in 2011, but has been repaired.

In 2012, the Mary Ingalls Society was founded to highlight the school’s connection to the family depicted in the eight popular “Little House” books. Mary Ingalls — the blind sister of author Laura Ingalls Wilder — attended the Vinton school in the 1880s.

The Laura Ingalls Wilder home in Missouri is a tourist site and a “National Historic Landmark.” Vinton residents are hoping to boost tourism in the town by highlighting Mary Ingalls’s connection to Vinton.