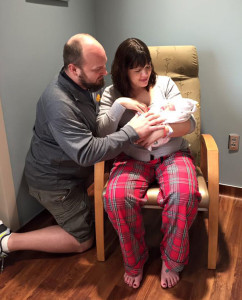 A child who was scheduled to be born at a hospital in Council Bluffs couldn’t wait to see the world and was instead delivered on a westbound Interstate 80 off-ramp, near Marne.

Cass County Chief Deputy Sheriff John Westering says, “There was a baby delivered at Exit 51 off of I-80 at a little after 7 o’clock this morning.” The baby was born to Chris and Erica Bengel, a couple who have lived in Atlantic for most of their lives.

Westering says by the time law enforcement arrived on the scene, the baby had already been born and was being taken care by the mother and father. Emergency responders provided the mother and baby with blankets before they were transported to the hospital in Atlantic. Brinley Nicole Bengel was born at 7:11 A.M., weighing 8 pounds, 11 ounces.

Westering says the father was understandably jittery afterward, but both new parents handled the situation well. “On a regular basis in a hospital, it’s a big thing, let alone going down the interstate,” he says. While emergency personnel were on the way to the scene, the Cass County Communications Center provided updates from the couple with regard to the baby’s progress.

An Iowa State Patrol trooper in the area was first on the scene, followed by an Iowa DOT employee, Cass County Sheriff’s deputies, other emergency personnel and an ambulance.

(Reporting by Ric Hanson, KJAN, Atlantic/ photo from the “Around Atlantic” Facebook page)