You are here: Home / Crime / Courts / Hillary Clinton joins those urging Senator Grassley to ‘do his job’ 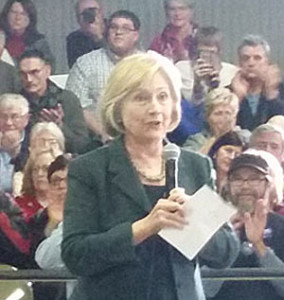 Clinton’s comments drew a rousing response from an audience in Madison, Wisconsin.

“I’m adding my voice to the chorus asking Senator Grassley to step up and do his job,” Clinton said. “He should hold a hearing.”

Grassley is chairman of the Senate Judiciary Committee, the panel that reviews a president’s nominees for the U.S. Supreme Court. Grassley says the next president should fill the vacancy on court, so voters this November can have a voice in the court’s future.

“As one of the more than 65 million Americans who voted to reelect Barack Obama, I’d say my voice is being ignored right now because of their obstructionism,” Clinton said, to extended cheers.

Clinton said Grassley and other Republicans in the Senate are acting like Obama is no longer the nation’s leader.

“I’ll tell you, those are not high-minded principles,” Clinton said. “They are low-minded politics.”

Clinton called Merrick Garland — Obama’s nominee for the nation’s highest court — “one of the most respected judges in the country.” The “saga” over Garland’s nomination is revealing “the worst” of our politics, according to Clinton.

“The same obstructionism that we’ve seen from Republicans since the beginning of the Obama Administration, the same disregard for the rule of law that’s given rise to the extremist candidacies of Donald Trump and Ted Cruz,” Clinton said. “It’s corroding our democracy and it has to stop.”

Grassley issued a written statement, saying Clinton’s remarks were a “a blatant attempt…to politicize the Supreme Court.” Grassley said Clinton wants “to change the conversation” about the emails Clinton sent while she was Secretary of State.

Grassley also suggested Clinton wants Obama’s pick to become a Supreme Court justice because she might face a legal fight over her emails.