You are here: Home / Crime / Courts / Des Moines police officer remembered for accepting the challenge of the job

Police Chief Dana Wingert talked about what it was like to hear that Farrell and officer Carlos Puente-Morales died in a car accident Saturday.

“They didn’t make, those are the words we heard. Words we will never forget, nor should we,” Wingert says. “It’s one of those ‘do you remember where you were when’ moments.” Farrell was 30 years old and had just joined the department after serving as a jailer and deputy with Polk County.

“This will always be remembered as a life cut too short, a career ended too soon, a wife, a mother, a daughter, a friend, a police officer who has so much more to do. Amazing things to be accomplished in all 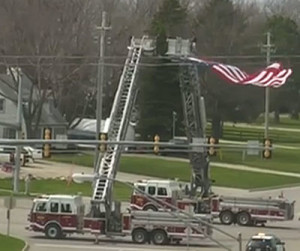 those very important roles,” Wingert says. “What we are left with are the memories, lives touched, friendships forged.”

Wingert addressed the other members of the academy class that graduated with Farrell and told them this isn’t how their careers are supposed to start.

“There’s no making sense of what is truly senseless. There’s no explaining the unexplainable. Sad, tragic, heartwrenching, are terms that don’t even begin to describe what has happened, the words don’t do it justice. We can’t fix the hurt, we can’t fix what happened. We have to put that all in the hands of a higher power,” Wingert says.

He talked about the love Farrell and her husband Jesse shared, and that both were police officers. Wingert says Farrell had a plan for what she wanted to do. 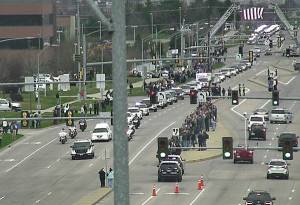 View of funeral procession from a DOT camera.

“She jumped in at a time when it probably wasn’t viewed as the easiest career path — in an age of criticism and second guessing — there has to be more to it. For Susan, like most of us, there is so much more to it,” according to Wingert.

He says Farrell didn’t back away from the challenge.

“Law enforcement isn’t flashy and glamorous, it is however noble and very, very necessary. What is overlooked is law enforcement and public service at that local level is the very foundation for a peaceful and orderly society,” Wingert says. “A tremendous amount of responsibility that officer Farrell was willing to accept, knowing full well that it would be at times be trying and it would be at times challenging. Recognizing that someone has to do this job, and she was willing and able to fill that role.” 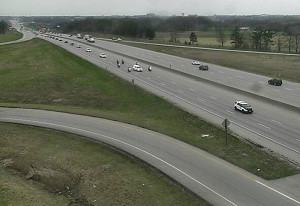 The funeral procession was several miles long as it moved along the interstate.

funeral. “They sign on because you know that there are people like this in this room that will always be there for you. It is who we are, it is what we do, there is nothing quite like it. And officer Susan Farrell will always be a part of this family,” Wingert says.

The service ended with the final dispatch to Farrell: audio

The funeral procession stretched for several miles and police and firefighters lined the overpasses of the interstate and the public lined the streets in a salute to Farrell.

Farrell leaves behind her husband and daughter. The funeral for officer Carlos Puente-Morales is Friday.