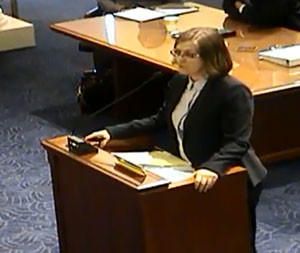 The Iowa Supreme Court heard several arguments in a case Wednesday that could impact whether felons in the state get the right to vote back after getting out of prison.

ACLU of Iowa Foundation attorney Rita Bettis argued that Kelli Jo Griffin served her time on a 2008 nonviolent offense for delivering drugs and should be able to vote.

“Under the laws and policies that we’re challenging, she remains barred from exercising her fundamental right to vote,” Bettis says. Justice David Wiggins jumped in and asked :” Under your theory does that discharged of her sentence have really have anything to do with this, aren’t we trying to decide if she was really disqualified at all?” Bettis says that could be one option.

“This court as we see it has three options, all with solid legal support to resolve this question,” Bettis says. She says one is to follow the model of some other states and allow all people held in jail or prison for misdemeanor offenses vote by absentee ballot. Bettis says the second model states decide that people in prison still have the right to vote. She says the third approach is to limit the right to vote while people are in prison.

Griffen’s act is considered an “infamous crime” and prevents her from voting. Bettis argued all felonies shouldn’t lead to a voting ban. Bettis says the law defines the word felony is specifically defined as any crime punishable by imprisonment in a penitentiary, and she says the drafters of the state constitution do not use felony in the definition for crime where you lose your voting rights, because they did not use that word. She says infamous crime is too broad a definition.

Polk County Auditor Jamie Fitzgerald argues a three-prong test should be used to determine if someone gets their voting rights back. Justice Wiggens questioned attorney Gary Dickey, who represented Fitzgerald.

“Tell me why Auditor Fitzgerald, your client, thinks that he can administer a test such as the one he is proposing — and do it in a fair and reasonable way,” Wiggins says. Dickey says the state could work with the Department of Corrections and be able to make a determination for most prisoners.

“This is a fundamental right to vote, which in a democratic society, as the United States Supreme Court has said, is one of the most precious rights. So, to the extent that we have heartburn about administrative burdens — those should yield to expanding that right as much as possible,” according to Dickey.

Dickey talked about the process they would use to determine if a felon should be allowed to vote. He says the three areas of the test include the seriousness of the offense, whether or not it disrupts a democratic government, and what’s called “mens rea”, or the mental state and intent of the person committing the crime. “So only in those areas where they overlap would somebody be disqualified.”

Solicitor General Jeff Thompson told the justices the term “infamous crime” has always applied to all felonies, and that makes it easy to determine if a felon should have the right to vote. “You can interpret your case law, the constitution and the statutory scheme in a way that is cohesive by holding that line. It also has the side benefit of being predictable, and manageable and all those things,” Thompson said. Thousands of Iowans could be impacted by the decision the justices will make.