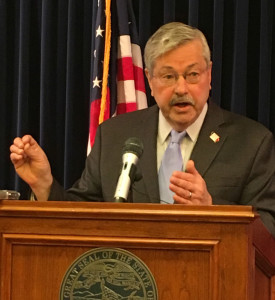 Branstad is now throwing his support behind the funding arrangements House Republicans are proposing for water quality initiatives.

“We are encouraged and we’re supportive of the legislation and we’re very hopeful that it will be approved,” Branstad told reporters Thursday.

A plan to use state taxes on water usage for water treatment plant and drinking water system upgrades in “disadvantaged” Iowa cities has cleared a House committee. Next week House Republicans plan to unveil phase two, which would divert some state gambling taxes to water quality projects. Branstad described these ideas from legislators as a short-term fix.

“We’re hopeful the senate will also consider it because we think action needs to be taken on water quality now,” Branstad said. “Even if we are not able to do the long-term source of funding, this will provide significant growth in funding for water quality.”

Senate Majority Leader Mike Gronstal said he and his fellow Democrats in the senate will give the water quality proposals from House Republicans a “good, fair look.”

“We continue to look for opportunities to begin a process that deals with this large problem,” Gronstal said during a news conference in his office. “I would say inside the institution at large, there (are) a lot of differences as to which way to go on this.”

Gronstal said some senators support raising the state sales tax by three-eights of a percent to finance water quality initiatives. And Gronstal has offered his own plan. It would involve using some of the money that’s not spent when the state’s budgeting year ends on June 30th of each year.