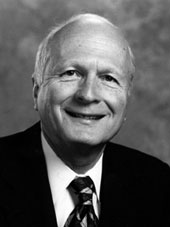 A prominent Iowa businessman and philanthropist has died.

Richard “Dick” Jacobson was born in 1936 and grew up in Belmond. After graduating from the University of Iowa he reportedly used $3,500 to build what became Jacobson Companies. The successful warehouse and trucking business allowed him to turn to philanthropy.

Jacobson has gave money to a variety of organizations, including all three state universities, the Iowa State Fair, and the largest ever gift to the Mayo Clinic in Rochester of $100 million.

Iowa Governor Terry Branstad issued a statement on Jacobson’s death calling him “an Iowa business icon and someone who relished in his philanthropic efforts around the country.”

The University of Iowa  Athletic Department issued these statements on Jacobson’s death:

“Dick Jacobson loved the state of Iowa,” said Gary Barta, the UI’s director of athletics. “He spent a lifetime building businesses, and then turned around and gave back generously to so many important causes. He was tough, yet caring at the same time. His legacy touched thousands, and will live on forever. Thank you Dick.”

“Dick Jacobson was a wonderful friend and fan of the University of Iowa and Iowa football,” said UI head football coach Kirk Ferentz. “His passion for the Hawkeyes was only exceeded by his commitment and generosity to our program. Dick embodied the spirit of what makes the state of Iowa so great – – work hard, take pride in what you do, and understand the value of character.”

“The Iowa State Athletics family was saddened to hear the news today about Dick Jacobson’s passing,” Iowa State Director of Athletics Jamie Pollard said. “Dick was truly a special man and a proud Iowan. While he may have supported Cyclone Athletics through his many generous donations, he was an even better friend to all of us in the athletics department. He will be missed, but never forgotten here in Ames.”

Photo from the Iowa Business Hall of Fame website.