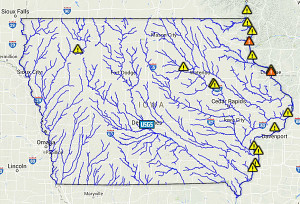 As the spring thaw arrives and rivers start to rise, a free online tool is available for some 20 Iowa communities that shows river levels and flooded areas – street to street – all in real time.

“It includes information from the National Weather Service, the U.S. Geological Survey, the Army Corps of Engineers, as well as data that we create,” Young says. “It’s all in one location and publicly available in a Google Maps interface, so it’s relatively easy to use and frames the information in a way that makes it relevant to each individual community in the state.”

In addition to the real-time views, there are more than 1,000 waterways in communities all across Iowa hyperlinked on the website. The tool is designed to help emergency managers know where to deploy resources like sandbags and it can help Iowa homeowners know if their house may soon be in jeopardy.

“It’s intended for community leaders as well as individuals,” Young says, “so even individuals who need to be better informed about how their personal property might be impacted by a flood, either during an event or what their long-term flood risk is, they can use this as a resource.”