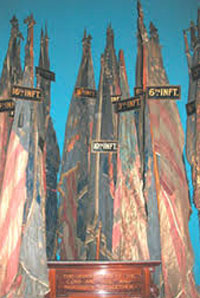 Officials with the Iowa Historical Museum in Des Moines say a more than 15-year project to stabilize Iowa’s collection of battle flags dating from the Civil War is now complete.

Collections coordinator Kay Coats says just getting the flags out of their display cases at the statehouse was a big job. “It took four years to remove all the flags from the capitol and move them to the museum down the hill. After those flags were all laid flat additional restoration work was done in preparation for exhibition,” Coats says.

The collection includes flags from the Civil War through World War I and beyond. The project began in 1999 when it was clear that the flags in several display cases at the statehouse were deteriorating.

“Textiles are particularly sensitive to light, they’re particularly prone to fading, and to breaking down, particularly silk, which a lot of civil war flags are,” Coats says. The flags were on flagpoles in a common display case that did not protect them for the elements.

“It became very obvious that this was not a sustainable environment for flags,” according to Coats. A new museum quality display case is now available at the capitol to preserve the stabilization work, and flags will be rotated through for exhibition there and at the museum. The stabilization involved laying the flags flat, because displaying them on flagpoles put stress on the fabrics.

The entire project cost more than $2.2 million as around $95,000 was appropriated each year for the work. The governor’s Cultural Affairs budget for next year includes a savings of $95,000 that’s no longer needed with the work completed. capitol.