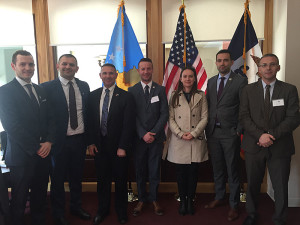 Members of the Kosovo delegation at the Republic of Kosovo Consulate in Des Moines.

A delegation of leaders from the public and private sectors in the nation of Kosovo is in Iowa this week learning about economic development.

Heidemann says, “The goal is to offer them some context for procedure and the theology behind how the economic development professionals here work and how they look at attracting investments and how then they spend that investment money.”

One key about which they want to learn is how to work between public and private sectors when securing funding for infrastructure development. Heidemann says America and Eastern Europe have alternate takes on economic development.

“It’s totally different,” Heidemann says. “Some of the things that they’ve been learning about just since they’ve been here are completely new concepts for them.” The delegation arrived in Iowa last Friday and will be in Iowa through Saturday.

When foreign visitors come to Iowa, sometimes language can be a barrier, but not on this trip. “Like many Kosovars, they speak several languages,” Heidemann says. “All of them speak English fluently so we’re not using interpreters for this group.”

The delegation is visiting with representatives of the Iowa Economic Development Authority, Greater Des Moines Partnership, Iowa Department of Education, Iowa State University, the University of Iowa and Des Moines Area Community College. They’ll visit the NewBo revitalized market area in Cedar Rapids and will also meet with officials from Coe College and Central College, both of which offer scholarships to Sister State students.

Kosovo is Iowa’s newest sister state, joining the other eight in 2013. Kosovo recently opened a diplomatic office in downtown Des Moines, the first of its kind in Iowa. Iowa’s formal relationship with Kosovo began in 2011 when the Iowa National Guard was partnered with Kosovo’s Security Force.