You are here: Home / Crime / Courts / State to collect data to determine extent of human trafficking in Iowa 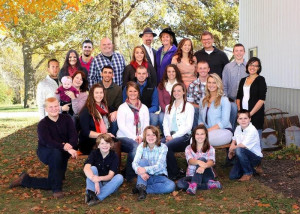 Ruth Buckels and her family. ( Photo by Pete Tekippe Photography)

Governor Terry Branstad has approved the creation of an anti-human trafficking office within the Iowa Department of Public Safety.

“This office will provide a main focus point of contact for human trafficking issues in the state,” Branstad says, “as well as the leadership necessary to help leverage other resources necessary to better address this heinous crime.”

“It is in small towns. It’s on the road. It’s in gas stations. It’s at hotels. It’s at motels. It’s at strip malls. It’s at the movie theater,” Buckels says. “It’s any place that youth are.”

Buckels says she knows about 140 former human trafficking victims in Iowa. Six of them are now her adopted children.

Legislators unanimously passed the bill that creates the new state government office to address human trafficking concerns. It’s expected to collect data about forced labor and sexual enslavement to determine the extent of the human trafficking problem in Iowa.