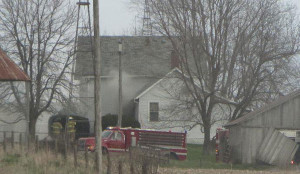 Charles Darby died in this fire.

The cause of death has been released for a man found dead in a southeast Iowa house fire has been determined.

The fire in the Washington County town of Ainsworth happened on March 31 just before 2 p.m. Fire crews found the body of 69-year-old Charles “Chuck” Darby inside the home.

The Iowa State Fire Marshal’s office has now confirmed Darby died of smoke inhalation. The cause of the fire has not been determined.

Investigators say the home did have a working smoke alarm. So far this year, 19 people have died in structure fires in Iowa.