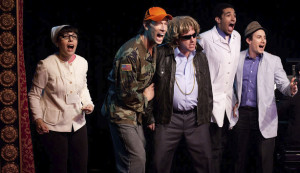 An Iowa actor who now lives in New York is returning this week as one of the stars of a show called “Broadway’s Next Hit Musical.” It’s a completely unscripted production that includes an awards show and a musical rolled into one.

Robert Grant, who calls both Fort Dodge and Des Moines home, says many stage veterans consider improvisation to be the scariest form of theater, but he thrives on it.

“I fell in love with it. The first time I took a class, I just thought, ‘Where has this been all my life?’ This is what I was meant to do,” Grant says. “Part of the fun of it is that we can be whatever characters we want to be. You can play a grandmother or a kid or whatever and the world of possibilities is open.”

The production relies heavily on audience members to suggest unique made-up song titles which the cast creates on-the-spot and incorporates into a spontaneous musical tale.

Grant, who graduated from Dowling Catholic High School in 1987, says some audience members come to the show several times during the week because every song is fresh, every scene is new and every night is different.

“A lot of the fun of improvisation comes out of the quote-unquote mistakes that happen,” Grant says. “We don’t consider anything to be a mistake. We consider it to be a gift and we try to accept everything that’s coming at us and weave it into the story. I think that’s why audiences laugh along with us because they enjoy how we solve all of the problems that come up as the show goes on.”

Broadway’s Next Hit Musical opens at the Temple Theater in Des Moines on Tuesday night and runs through Sunday.