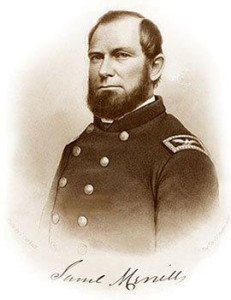 The final resting place for Iowa’s seventh governor is nearly renovated and the private fundraising drive to finance the job has reached its goal.

Governor Samuel Merrill died in 1899 and his body was placed in a mausoleum in Des Moines.

“After a century of neglect and a falling oak tree, the mausoleum became home to possums and raccoons rather than the hallowed ground of an Iowa hero. Upon inspecting the damage, it became clear that we were at risk of losing this monument, possibly forever,” says Jonas Cutler, a Marine veteran who’s a member of Patriot Outreach.

Patriot Outreach is the veterans organization that has led the effort to raise $50,000 to restore Merrill’s mausoleum.

“This project really follows the example Samuel Merrill set for us and will serve as a visual reminder for future generations of Iowans to act when the need arises rather than wait for somebody else to do it,” Cutler says. 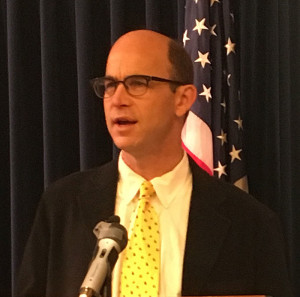 Merrill ran a dry goods store in McGregor and he personally paid for the uniforms Iowa soldiers in three regiments wore in the first battles of the Civil War. Merrill soon joined the Grand Army of the Republic himself. He was wounded leading the charge at the Battle of Black River Ridge that was part of the campaign to claim Vicksburg, Mississippi.

Merrill became the first post-Civil War governor of Iowa and Iowa’s current governor has donated the final $6500 to complete the project. The money comes from the Iowa History Fund Governor Terry Branstad set up, to distribute the profits from the sale of his biography.

“Here’s this Civil War hero, who served as our governor, who gave so much,” Branstad says. “What a great way to start.”

Branstad vetoed $100,000 in state money for the project to restore Merrill’s burial site. The private group that led the restoration effort raised about half that much, along with in-kind contributions from volunteers.