You are here: Home / Sports / Different style but same results for Kirkwood softball 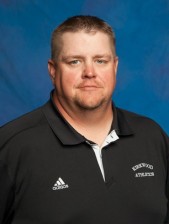 The Kirkwood Community College softball team is not hitting as many home runs as in past years but the Eagles are still scoring runs in bunches in a 37-4 start to the season.

Kirkwood is hitting .444 as a team and during its current 13-game winning streak is averaging nearly 14 runs per game.

“There is a little more speed in this group and I think we are tied for first in the nation in triples”, said Kirkwood coach Joe Yegge. “We just have a more balanced attack this year.”

Yegge has built his program around offense and says it is a year round commitment. In his ninth season at the helm Yegge has led three Kirkwood teams to the division two national tournament.

“Our girls when they come to Kirkwood are probably going to hit at least four days a week year round. Our league is about scoring runs because at the junior college level pitching is not the greatest because everybody else is gobbling up pitching so we feel if we can get one good pitcher we are going to outscore everybody.”

Kirkwood returns to action on Wednesday by hosting Ellsworth.