You are here: Home / Fires/Accidents/Disasters / Lake Delhi could be full again in time for summer fun 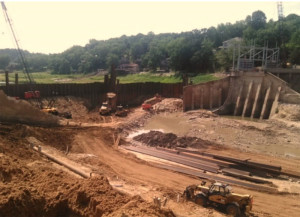 Northeast Iowa’s Lake Delhi, which was drained nearly six years ago after torrential rains caused the lake’s dam to breach, is set to make a return just in time for summer.

Work on the $16 million dam restoration began two years ago, and Lake Delhi Trustees President Steve Leonard says they’ve had a lot of positive momentum since the weather started drying up this spring.

He says they had some issues with moisture and the compaction of the clay below the concrete. But he says they’ve been able to move full speed ahead as the ground dried out. “In the last three or four weeks we’ve really laid a lot of concrete,” Leonard says.

He says they have a few more weeks of concrete work left to get done. “Through probably late April, very early May, and then a lot of other work around the dam site and around the spillway. And we are hoping that completion can be intact by Memorial Day weekend,” Leonard says. “And if all goes well — actually have a recreational lake by Memorial Day — or a couple two, three weeks thereafter.”

They’re planning to hold a big celebration this summer to mark Lake Delhi’s return. “This is a once in a lifetime for so many people. Lake Delhi is so near and dear to so many people’s hearts and minds — not only from a recreational perspective — but just raising kids and families during the summers, and out winters, depending on what their activities are,” according to Leonard.

A committee is meeting for the first time this week to discuss ideas for the celebration.”We’re looking to create something that Lake Delhi has never seen in the past, and something that people remember for many years to come,” Leonard explains. “I just don’t know what those details are, but we are in the process.” He says anyone who would like to help with planning the Lake Delhi celebration can contact one of the Lake Delhi Trustees or reach them through their website at lakedelhi.org.

The reconstruction is being funded by a combination of FEMA funds, $5 million from state, Delaware County is paying $3 million, and the rest is coming from Lake Delhi residents.