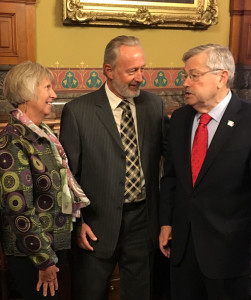 A Colorado couple stood behind Governor Branstad early this morning as the governor signed legislation requiring carbon monoxide detectors in all Iowa rental units by July 1, 2018.

“This bill will save lives and I find that remarkably exciting and it’s a great honor to get to be here,” he said, the tears forming as he choked out: “and watch this moment.”

Carol Johnson spoke as her husband shook hands with lawmakers and lobbyists who had worked on the bill.

“It’s so emotional. It just is,” Carol Johnson said. “I’m from Nebraska. Last year we got it passed in Nebraska. That’s my home state and this year Iowa, next year North Dakota. We’re trying to get it in all 50 states, so we’re chipping away.” 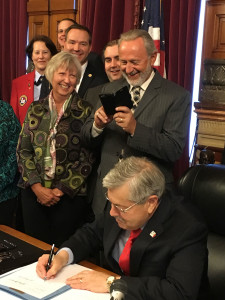 Don Johnson grew up in Ellsworth, Iowa, and earned degrees from the University of Iowa and Wartburg Seminar. Johnson said the bill is a great way to honor his daughter.

“Carbon monoxide is an insidious, silent killer that can sneak up and kill you before you even know what happened and so the carbon monoxide alarms are such an easy fix and inexpensive,” Johnson says. “One CO alarm for $50 can last for 10 years with no batteries to replace in the newest technology.”

Johnson broke down as he told reporters he wishes he’d spent the money to buy an alarm for his daughter’s apartment.

“I’ll go to my grave disappointed in myself that I didn’t have the wisdom to think that through,” Johnson said. “She was an incredibly gifted human being.”

Similar bills have stalled in the Iowa legislature in the past, as critics raised concerns about the cost. The bill sailed through the Iowa House and Senate this year, however, with strong support after Johnson personally lobbied Iowa lawmakers.

“It’s just common sense,” Johnson told reporters today. “Why would we not want to protect the people we love the most?”

The Johnsons have lobbied for similar laws in four other states and they’re off to North Dakota. More than 30 U.S. states now require carbon monoxide alarms in homes and apartments.

Learn more about Lauren and her parent’s campaign to build awareness about the dangers of carbon monoxide here.