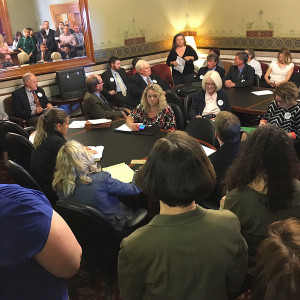 A bill that would increase the state sales tax by a fraction — to raise money for water quality projects — has cleared its first hurdle in the Iowa Senate, but it faces strong opposition that’s likely to sink the proposal.

Senator David Johnson, a Republican from Ocheyedan, has become a champion of the tax hike, to fill a state fund Iowa voters created in 2010 for water quality initiatives.

“What is this General Assembly going to be remembered for?” Johnson asked today. “…We can do this and it is the best plan.”

Johnson and about two dozen other people spoke in favor of the plan during a statehouse hearing Thursday afternoon. Mark Ackelson, a former president of the Iowa Natural Heritage Foundation, said water quality problems are “urgent” and it’s time for legislators to act.

Two state senators signed off on the proposed tax hike Thursday. That makes the bill eligible for debate in a senate committee. Earlier this week House Republicans advanced their own plan. They want to shift state taxes being used for other purposes toward water quality projects. Senate Democratic Leader Mike Gronstal told Radio Iowa it does not appear any plan has enough support in the senate.

“I would say there’s a lot of ships passing in the night and lots of and no consensus developing on a funding mechanism,” Gronstal said.

Representative Tom Sands, a Republican from Wapello, chairs of the House Ways and Means Committee. He told Radio Iowa a “straight up” tax increase cannot pass the Republican-led House.

“This idea of just going to Iowans and saying: ‘You need to pay more,’ I do not support,” Sands said. “But it very possibly with some changes could be more of a long-term going forward, just not this year.”

Sands said that means cutting income taxes at the same time the sales tax is raised.

Senator Janet Petersen, a Democrat from Des Moines, said it will be up to advocates of the tax increase to get lawmakers to embrace the plan.

“I believe we can move mountains in the legislature, but it requires Iowans not to sit on their couch and just expect it to happen,” Petersen said, “but people need to get on their phones and they need to email and let people truly know how badly they want this.”

Petersen supports the three-eighths percent increase in the state sales tax, with those extra taxes deposited into the “Natural Resources and Outdoor Recreation Trust Fund.” Sixty-three percent of Iowa voters approved creation of the fund in 2010, but there’s no money in it.