You are here: Home / Crime / Courts / Iowa woman testifies about daughter’s death caused by man in the country illegally (audio) 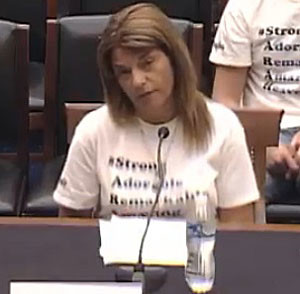 A southwest Iowa woman testified before a Congressional panel today about how her daughter was killed in Omaha by a drunk driver who was in the U.S. illegally.

Michelle Root, of Modale, told how a matter of hours before the crash, her 21-year-old daughter had graduated from Bellevue University with a 4.0 GPA.  Sarah Root, who lived in Council Bluffs, wanted to go on and earn a master’s degree in criminology.

“The night of January 31st, 2016, as she was coming home, she was rear-ended by Eswin Mejia who was 19 years old, here illegally, drunk driving, street racing,” Root says. “My daughter died instantly.” Bond was set by the judge on the suspect at $50,000 and Mejia was released after posting the standard 10 percent, or $5,000. Mejia, a native of Honduras, hasn’t been seen since and is feared to have fled the country.

“The local law enforcement did their job,” Root says. “They detained him, went to ICE, tried to get a hold on him, ICE refused. I don’t know why that was, with everything that happened, but he is on the loose now and our family does not have closure.” Police say Mejia’s blood-alcohol level was three times the legal limit and he was driving on a suspended license when he was speeding and caused the accident.

“We probably never will have closure, even if he is found,” Root says. “I just hope that he will be, someday, found to pay for the crime he did against my daughter.”

Root appeared before the House Subcommittee on Immigration and Border Security while wearing a t-shirt that read: Strong Adorable Remarkable Amazing Heavenly. The first letters from each word spell out Sarah.

In her statement, Root blamed Obama administration guidelines for deeming the suspect in the case to be no threat to public safety. “We are not against immigration,” Root says. “Sarah’s grandmother was an immigrant from Vienna, Austria. She did it legally. She did it the right way. That’s all we’re asking. It’s the illegal immigrants that are already breaking the law once they come over here and they continue to break our laws.”

Representative Trey Gowdy , a Republican from South Carolina, chairs the subcommittee and addressed the Root case directly. Gowdy says, “How in the hell somebody here illegally who operates a vehicle at a high rate of speed and three times the legal rate of impairment and kills a 21-year-old girl doesn’t meet priorities of ICE is precisely why so little people have confidence in this administration’s policies and priorities and precisely why so many people are angry and fed up with the current state of immigration enforcement.”

Gowdy blames the Obama administration and ICE for the tragic circumstances. Gowdy says, “If killing a young woman while racing in an impaired state and being here illegally in the first place does not meet priorities, then perhaps your priorities are wrong.” In her statement, Root noted that her daughter was the “hero” of the story as she was an organ donor and “unselfishly saved the lives of six individuals through her donation and helped another four dozen through her donation of tissue and bone.”

A similar case has surfaced in Omaha. A Honduran man who officials say is in the U.S. illegally is charged in a deadly hit-and-run. Police report 27-year-old Edwin Elvir-Palma is charged with leaving the scene of a fatal accident, suspicion of reckless driving, not having a driver’s license, and his fourth DUI. Elvir-Palma is accused of running over 34-year-old Margarito Nava-Luna early Saturday morning in Omaha.