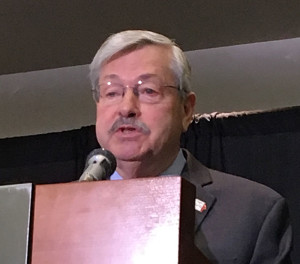 Governor Terry Branstad says the board that governs the state’s three public universities will have to deal with a “shortfall” in state taxpayer support, but he’s urging caution as the panel considers how much tuition rates should rise.

“I think they need to be careful and try to keep tuition increases very modest so we continue to reduce student debt,” Branstad said during his weekly news conference.

The chairman of the Board of Regents says tuition rates for students at the University of Iowa, Iowa State University and the University of Northern Iowa will have to be raised for this fall because of “limited” state funding. Radio Iowa asked Branstad if a tuition increase is the appropriate response to the legislature’s budget plan.

“We had an unprecedented three years of no increase in tuition,” Branstad said. “And the increase that we’re looking at is relatively modest.”

“You will see tuition increases,” Schoenjahn said during remarks in the Senate yesterday. “(Iowa State University) President Leath said: ‘Sadly, we may have to increase our entrance requirements.'”

Schoenjahn said the $26 million state funding boost the universities requested was just to “break even” and deal with inflation.

“We have got to reprioritize and make education number one,” Schoenjahn said, his voice rising. “…You grow your way out of a recession, not cut your way out of it and we need to invest in our kids and our future.”

Schoenjahn, however, asked his colleagues to support the “status quo” spending plan for the public universities, as it is the end result of negotiations with House Republicans. Republicans say it’s a “tight” state budget overall, but they were able to find a way to reallocate a bit more to the universities than originally planned.

The House has yet to give its final approval to the spending plan for the Regents schools. The Senate passed the bill yesterday afternoon.