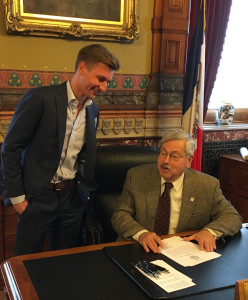 “It is important that we deliver health care in more modern ways and more local settings,” Branstad says.

The legislation expands a pilot project and will let so-called “tele-pharmacy” services go statewide in communities with more than 500 residents.

“Many Iowa towns including Zearing, West Liberty, Brooklyn and State Center have already taken advantage of the pilot program, but we know many more would like to have a tele-pharmacy,” Branstad says.

Roby Miller owns TelePharm, an Iowa City company that’s offering the services of a licensed pharmacist to remote locations in 12 other states. He started the business in 2012, out of his father’s pharmacy in Victor, Iowa. That’s where the state’s first “tele-pharmacy” pilot project was launched.

Miller’s dad, two uncles and an aunt are all pharmacists. Miller’s software lets someone at a pharmacy to contact his business to get a prescription verified electronically by a licensed pharmacist. The drugs can then be dispensed from that small town store by a certified technician.

“We get calls from small town pharmacy owners, independent owners that are wanting to convert their store to a tele-pharmacy because they don’t really have an option,” Miller says.

Now, qualifying pharmacies without a pharmacist on staff will be able to offer customers “tele-pharmacy services.” Miller, who is 29, currently employs 18 people, but he expects the business will grow significantly over the next few years now that it can operate in Iowa.