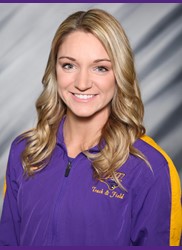 Northern Iowa senior Paige Knodle will try to establish another personal record when the Drake Relays heptathalon begins Wednesday for the first of two days of competition.

After missing last season due to injury, Knodle has already posted the best score of her career this season with 5,680 points.

“She did the heptathalon at the Texas Relays where she put up a score that puts her in the top 20 in the country”, said UNI coach Dave Paulsen. “She is looking to improve on that and hopefully have a shot to set even more personal bests.”

Knodle finished sixth at the Texas Relays and her score ranks 12th in the country this season.

“This is going to be good for her because she is going to face the level of competition that she will see at the national championships so that will pay big dividends down the road.”

The heptathlon starts Wednesday with the 100 meter hurdles.