You are here: Home / Crime / Courts / Legislators strike accord on state oversight of boarding schools 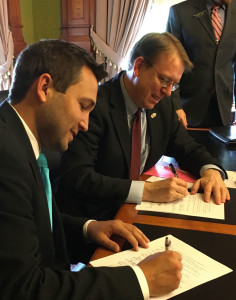 Employees at privately-run boarding schools in Iowa will have to undergo background checks if a compromise that has emerged at the statehouse becomes law.

Legislators began crafting a bill to establish state oversight of private boarding schools after allegations of sexual abuse and mistreatment at the now-closed Midwest Academy in southeast Iowa were exposed. Representative Bobby Kaufmann, a Republican from Wilton, says the bill provides basic oversight that will likely catch any “bad actors” like the Midwest Academy in the future.

“You can never be certain,” Kaufmann says. “But I do believe that the 67 complaints outside of child and sexual abuse where you had kids that were sleeping in their own feces and getting scabies would now, under this bill, the department would be able to shut down these academies, because they would be licensed.”

Senator Rob Hogg, a Democrat from Cedar Rapids, says the bill establishes the basic concept that private boarding schools in Iowa must either be certified or licensed by the state.

“I think it was important that we act on this issue because we need to provide that certainty to families that if their children are in these facilities, that the state of Iowa has some eyes on them,” Hogg says.

One sticking point between the House and Senate had been over how much influence the Iowa Department of Education would have over “bona fide” religious institutions that run boarding schools. Under the compromise, the state will have zero oversight of any “religious curriculum” in these kind of facilities, something Kaufmann and his fellow Republicans in the House were seeking.

“It provides some basic oversight, while making sure the good actors are not unfairly affected,” Kaufmann says.

The Midwest Academy had facilities in Montrose and Keokuk and billed itself as a boarding school for troubled kids with behavior and substance abuse problems. Kaufmann says the facility told parents their kids were being properly educated by state-certified teachers.

The Midwest Academy opened 13 years ago. There were 90 students at the facility it was closed in January. Hogg says while state officials had been notified of trouble at the academy, state law did not explicitly give the state any authority to respond because it was a private facility.

“I don’t think you can ever guarantee that there won’t ever be a problem anywhere,” Hogg says. “But when there is a sign of a problem, we need to state to have the authority to act and I think this gives the state ample authority now to act.”

The bill has cleared a 10-member panel of legislators appointed to find a compromise plan for regulation of private boarding schools. Kaufmann and Hogg expect the House and the Senate to endorse the plan soon, perhaps sometime this afternoon.