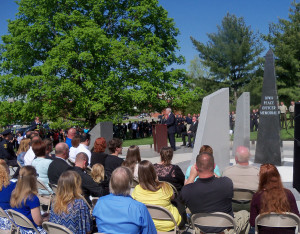 The annual Peace Officer Memorial ceremony near the state capitol today included the addition of the names of four officers who died in the line of duty.

The event on the bright sunny day came less than one month after the death of two Des Moines police officers in a traffic accident. State Patrol Colonel Michael Van Berkum read their names of the fallen officers, starting with Des Moines officer Susan Farrell.

“Officer Farrell served law enforcement at the Polk County Sheriff’s Office and was a reserve for the Pleasant Hill Police Department before joining the Des Moines Police Department in April of 2015. She served a total of just over eight years as a law officer in the state of Iowa,” Van Berkum read. He also acknowledge the death of Farrell’s partner, Carlos Puente-Morales in the same accident. 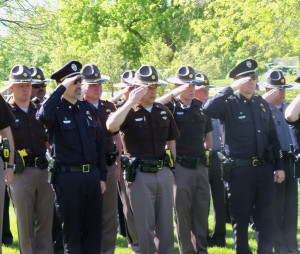 Dozens of officers turned out for the memorial ceremony.

Sergeant Howard Snider died in June of 2012 after jumping into the water to catch a boat that was drifting away with his daughter in it. Snider went under the water and never came up, and an autopsy determined he had suffered a heart problem. “The state medical examiner ruled the pulmonary embolism was caused by an injury he sustained on duty several days prior to his death. Sergeant Snider served as a law enforcement officer in the state of Iowa for 23 years.” 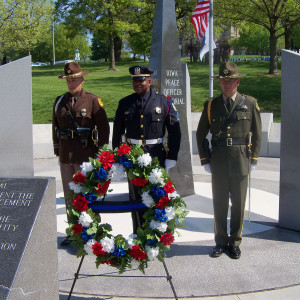 A wreath was placed at the Peace Officer Memorial at the end of the ceremony.

The fourth officer recognized was Iowa Department of Corrections field agent Albert Paul. Paul died in car accident in New Mexico in 1938 while bringing a fugitive back to Iowa. Department of Public Safety executive officer, Jeff Ritzman, talked about the sacrifice of the officers. “Today we honor those who have made the ultimate sacrifice. It is because of dedicate, selfless, extraordinary officers like the men and woman that we are honoring today, that we can go about our day-to-day lives with a sense of safety and security,” Ritzman says.

Ritzmann also recognized the dozens of officers attending the ceremony. “As you look around today, you see several of these men and women who take an oath and proudly wear the uniform or carry the credentials of a law enforcement officer, ” Ritzmann says. “With that oath, they humbly offer their lives to protect our lives each and every day, so that we can go home safely to our families.”

Governor Terry Branstad read a proclamation honoring the officers and also presented a folded flag to the family members in attendance. “Without these brave men and women, our state, our counties and our cities, would not be the safe place that they are for our citizens to call home,” Branstad says. “The citizens of Iowa appreciate all of our brave peace officers.” The ceremony ended with a 21-gun salute and taps.

The memorial west of the state capitol recognizes 181 law enforcement officers who have died in the line of duty in Iowa.