You are here: Home / Military / Those who suffered after service in Vietnam recognized at state memorial 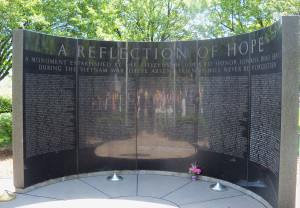 A special addition was added to the Vietnam War Memorial on the Iowa State Capitol grounds today.

Fourth grade students from the Iowa Christian Academy sang a patriotic medley, Governor Terry Branstad read a proclamation and then unveiled a plaque a short distance from the black granite monument that honors the 867 Iowans who died while serving our country in Vietnam.

The plaque recognizes those who came home from the war, but later suffered from things like of PTSD, Agent Orange and suicide connected to their war experience.

Vicki Swarts’ husband Tony, an Air Force veteran, was one of those soldiers. “This monument was a compelling way to share with — not only the military community — but with family and friends that truly understand the sorrow, the grief, and the loss of a life that has prematurely gone from sight,” Swarts says. Swarts’ husband died from illness related to agent orange, a chemical that was sprayed on the jungle to kill the leaves to make it easier for U.S. soldiers to see the enemy. 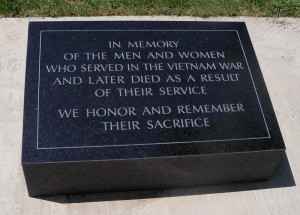 Vietnam veterans surrounded the area around the memorial for the plaque unveiling. Swarts told them how important they were. “We had tears of joy and we had love in hearts for you. But we didn’t know that with you, some of you, brought the impact of an unknown enemy,” Swarts says. “It was a chemical force that the government had planned would accelerate the end of the conflict, agent orange, which contained dioxin.” Swarts acknowledged that the Vietnam War was not popular, and says it is a glorious day for all of those to see the veterans again honored by the state.

“Our military personnel were not always given a warm welcome home. Were not given respect and honor for their service — even in uniform,” Swarts says. “Fortunately the people of Iowa — the heartland and the 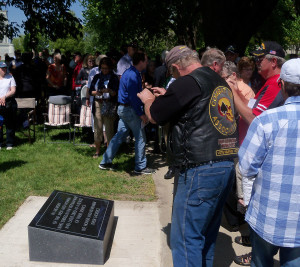 heart of this nation — have traditionally welcomed our veterans home with love, comfort, help and gratitude.”

Retired Colonel Robert King, the executive director of the Iowa Department of Veterans Affairs, says the plaque was the idea of Iowan and Vietnam veteran Dan Gammon. It is made from the same granite as the wall.

“Our plaque is small, but yet large enough to convey a message. We wanted to encompass and not distract. It’s purposely midway on the curved journey to the monument along sidewalk. It is place on the inside of the curve for greater visibility,” King says.

The Iowa Vietnam Memorial was dedicated in 1984.