You are here: Home / News / Another attempt to stop the Highway 330 interchange fails 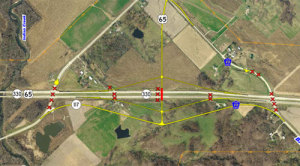 Another attempt to stop the building of a controversial interchange on Highway 330 in central Iowa failed Tuesday on a 4-3 vote by the Transportation Commission.

A vote in October of last year to stop the interchange where U.S. Highway 65, Iowa 117 and county road F-17 in Jasper County cross Highway 330 also failed on a 4-3.

The latest vote came after landowner Larry Cleverly addressed the board during its public comment time at the end of their regular meeting. He told the board the engineering firm he hired found adding a feature known as a J-turn was a better option.

“This report states that for $1.5 million two J-turns can be installed with a savings to the people of Iowa of over $14 million,” Cleverly says. The DOT says the interchange is needed after several accidents — some of them fatal — in that area of the highway . Cleverly says the added cost of the interchange won’t make much of a difference.

“The interchange that has been proposed would have prevented only one accident in the five years of analysis that was completed,” according to Cleverly. Cleverly says the interchange will needlessly take 30 acres of the farm that has been in his family for 88 years. “I came here today to ask you to pass a motion today to vote on this appropriation at your June meeting,” Cleverly says. “My family and I want this to end. You want it to end. You have no interest in seeing me again or hearing me again. The decision is in your hands.”

The director of the Iowa Department of Transportation, Paul Trombino, says he looked at the report and talked with its author, Jason Waters. He says the report does not make any recommendation on whether the J-turns or the interchange are the best alternative.

“What it does is basically it gives a summary of findings on page seven. And essentially what he advocated to me, he’s advocating from a value engineering prospective. Meaning there’s a significant cost difference here and maybe you need to do some cost engineering,” Trombino says. “He’s not advocating any specific alternative. So, I specifically asked him that.” Trombino says Waters did not make a site visit and leaves out some important information.

“First of all, the report doesn’t take into account the geometrics of the intersections or the road grades. In other words, the topography at all. They did not consider the topography difference between interchanges, or any geometrics across the segments. Because I asked him that specifically,” Trombino says. Cleverly spoke up and to say, “That isn’t true.” Trombino says that’s the conversation he had with Waters and that can be verified. He says the report does not take into account the amount of truck traffic on the highway and the problems they have turning because of the median width.

“We have gone through a significant public involvement process for many years and this is why we sort of stepped back to really reevaluate this project. I asked for that specifically,” Trombino says. “The district went back out with essentially an interchange and J-turn design. And there was not support from the J-turn both times that we had gone out.”

The interchange is in the DOT’s 5-year construction program, and the commission voted on a motion to hold another vote in June to take it out of the plan. That vote failed 4-3.