You are here: Home / News / DOT will spend more on consultants after lawmakers cut budget request 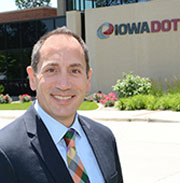 The Iowa Department of Transportation is looking to dramatically increase the amount of money spent on outside consultants after the legislature cut in half the amount of funding the department asked for in its budget for salaries.

DOT director Paul Trombino, told the Transportation Commission members during a workshop that they will need to trim some 60 positions this year, and will need to add 10 million more dollars into the next budget for outside consultants.

“The cost differential is ultimately knowing that we are going to go into the market and have to purchase — whether it be all types of engineering services across all program areas — and at times we are going to have to make some decisions about certain programs that we do now that we may not do in the future,” Trombino says.

The increase would be on top of the already proposed $22.5 million dollar increase in the budget for consultants, and add to the more than $57 million already spent on consultants. Trombino says the number of projects in the five-year construction plan is up 30 percent, and they need to be sure they have the services to manage those projects and keep them on time.

“And so that’s why we — from my prospective — we need to not just ask for the same number, we needed to ask for a larger number and really try to get ahead of that curve so we can deliver the work,” Trombino says. “Because you are talking a huge gap. A thirty percent increase in program work and an 18 percent decrease in staffing is a significant gap.” Trombino says they will not lay any workers off, but will instead not fill open positions. He says that means some changes are coming as they try to best manage the staff available.

He says they are going to remove 60 some positions off their books in pretty short order and then will have to figure out what the next budget year that begins in July 2017 looks like. “Which means that we are going to have to make some shifts across the agency and you are going to see that in garages and D-L (driver’s license) stations, and we are going to move resources around the state so we can address areas where we see areas of need,” Trombino says.

A commission member asked Trombino if it is more or less expensive for the department to use outside consultants on projects. “It’s always an interesting question, people ask that often. I always like to say it depends on the project. We are ultimately responsible for the budget of the project, so as I like to says –the engineering services which would be construction and design and all the things that go into that as a percentage of the project — that’s a key piece for us to manage,” according to Trombino. “And so we are shifting in this world where we have done a lot of that work, and now we are doing a lot less of that work. So we have to really manage those costs as we go forward.”

Trombino says once they make the shift to cut staff and use outside consultants, it is hard to turn around because of the cost of adding back staff. “As we move away from those areas, typically the cost become prohibitive. Not that it can’t be done, the cost becomes significantly higher,” Trombino says.

The DOT had asked lawmakers for $9.7 million to cover negoitiated pay increases, but lawmakers said they were unwilling to do so after approving an increase in the gas tax the last session. They ended up with a compromise that saw the legislature approve half of the funding.

The Transportation Commission is expected to vote on approval of the five-year plan at its meeting in June.