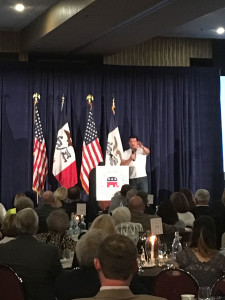 The first big Republican gathering in Iowa since the Caucuses was in Des Moines tonight. Governor Terry Branstad delivered a rousing pep talk to the crowd of 650 at the party’s annual spring fundraising banquet.

“Americans are anxious about the future. We need new leadership,” Branstad said, before yelling: “We need to make America great again!”

That, of course, is Donald Trump’s campaign slogan. Branstad acknowledged there had been “bruising” primary fight among the Republican presidential candidates, but Branstad told the crowd they “need to support” the party’s presumptive nominee.

Iowa Republican Party chairman Jeff Kaufmann took the baton from Branstad and turned it up a notch.

Kaufmann said Republicans who supported other candidates should “take the time they need to concentrate on how” the GOP can win back the White House.

“In the end, it’s ‘No More Hillary!” Kaufmann yelled as he pounded the lectern. “That is what binds us together.”

Kaufmann told the crowd Trump would be better than Clinton when it comes to gun rights, reducing the national debt and cutting government regulation.

“Most importantly of all, perhaps, if Donald Trump is president compared to Hillary Clinton we will have Supreme Court justices that understand the constitution and understand exactly what America is like,” Kaufmann said, to applause.

Iowa’s two U.S. Senators delivered brief video messages to the crowd, without mentioning the name Donald Trump. However, both Joni Ernst and Chuck Grassley praised the evening’s keynote speaker, a military contractor who was in Benghazi when the U.S. consulate there was attacked on September 11th, 2012. Kris “Tonto” Paronto is a former Army Ranger.

Paronto, who now lives in Omaha, spoke for an hour and got a lengthy standing ovation as he concluded.

“We’ve got to keep Hillary out of office and I’m going to be there, right up front, trying to help you guys,” Paronto said.

The next big gathering for Iowa Republicans is May 22nd. The GOP state convention delegates will vote on a party platform and vote on the final slate of Iowans who will attend the Republican National Convention in Cleveland.