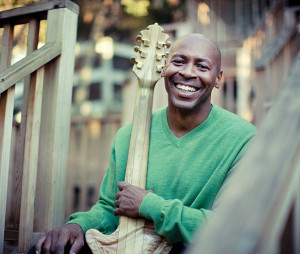 The musician who’s considered one of the best jazz guitarists of his generation is making his first Iowa visit for a one-man concert next week.

Kevin Eubanks,who was a guitarist and musical director of “The Tonight Show with Jay Leno” for nearly 20 years, has an exceptionally deep catalog of music but follows no particular set list when he and his six-string take the stage.

The 58-year-old Philadelphia native came from a musical family, comprised of several professional musicians. Among them, his mother is a classical pianist with a Masters Degree in music education, while an uncle recorded and toured with jazz greats like Miles Davis, John Coltrane and Sarah Vaughan.

Eubanks laughs, saying he “didn’t have much choice” but to be a musician. “If you’re born into a family, it really helps because when I was squeaking on violin, everybody put up with it because it was just kind of normal,” Eubanks says. “We know you’re going to play something so just wait until he settles on a particular instrument. I really wish that I had kept playing violin. It’s one of my musical regrets, that I didn’t continue to play violin.”

Eubanks joined The Tonight Show Band as a guitarist in 1992, the same year Johnny Carson retired. Three years later, he replaced the legendary Branford Marsalis as the band’s musical director, where he remained another 15 years. Eubanks left The Tonight Show in 2010, about a year after Conan O’Brien replaced Jay Leno as the host.

“I met so many wonderful people and learned so much about many things,” Eubanks says. “Jay and I are still really good friends to this day and we’ve done a lot of things together and I met some people that have come on the show for pretty much two decades and some of them I’m still friends with today.”

Leno has a remarkable collection of nearly 300 cars and motorcycles, most of them rare and extremely valuable. Eubanks was asked if he ever got to drive any of those incredible vehicles during his many years of working so closely with Leno. “No, no, no,” he says, laughing. “There’s one car I asked Jay to drive and then he asked me, ‘Well, do you drive a stick shift?’ and I said, ‘No,’ and he said, ‘Get away from my car!’ but since then, I have learned to drive a stick so maybe one of these days I will get to drive it. I have one favorite car that he has.” That car was a sleek three-seater McLaren, one of the fastest vehicles ever built, capable of topping out around 240 miles-an-hour.

He made his first recording as a band leader in 1983 at age 25 and has since appeared on more than 100 albums. Eubanks is playing May 20th at the Holland Performing Arts Center in Omaha and May 21st at the Temple Theater in Des Moines.