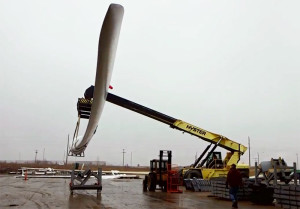 A TPI video shows a wind blade being moved a the Newton factory.

TPI manufacturing in Newton is sending its wind turbine blades farther away, thanks to an increase use of rail shipping.

The general manager of the facility in Newton, Terry Van Huysen, says traditionally the blades have been trucked — one at a time — to their destination, which is very costly.

He says about 80 percent of all blades built in Newton have gone to sites within a 750 mile radius. Technology has changed and the blades have become longer and longer, making it more difficult to ship them by truck.

Van Huysen expects the length of the blades to continue to increase, so the company has turned to railroad shipping. “A lot of these larger blades that we are currently building are actually being transported by rail to Texas. So, our reach has become much bigger than it has in the past,” Van Huysen says. When the 316-thousand square foot Newton plant opened in September 2008, Van Huysen says they were producing blades 37-meters long, or around 121 feet. Now the blades are about 60-meters — or 196 feet long.

While one truck can transport a wind blade, Van Huysen says it takes several pieces of rail equipment to do the same job. “There’s actually two rail cars that the blades kind of span across, because they have to be able to go around corners and things like that,” Van Huysen says. “And then they’ve got two large cranes at the loading sight where they actually load the blades onto the rail cars.” The blades are taken off the railcars at a site close to the wind farm where it will be used.

The Newton TPI plant currently has over 900 employees. TPI Composites started out in 1968 as a boat manufacturer. Van Huysen says the company began making wind blades in 2002 at their plant in Juarez Mexico.