You are here: Home / Crime / Courts / Cedar Rapids man arrested after chase and standoff with police 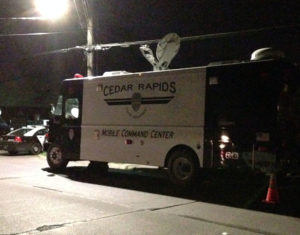 It was a restless night for some residents of an apartment complex on Cedar Rapids’ southwest side.

Police took a man into custody in the building just before 5 a.m. following a nearly four-hour long standoff.

Twenty-two-year-old Christopher McGee had led officers on a high speed chase before he barricaded himself in the apartment. Edward Mertz, one of the many residents evacuated from the complex, told KCRG-TV such disturbances aren’t uncommon for the area.

“We’ve got a gang problem in our little community here,” Mertz said. “It’s been going on here for quite a while. There have been shootings and murders here and the problem ain’t going away.” Mertz has lived in the neighborhood for two years. “I’ve got a little girl who lives with me and my wife and I’ve got some serious concerns about our safety here,” Mertz said.

Police accuse McGee stealing items from a woman, who reported he showed a handgun. Officers found and chased McGee until he stopped at Cedar Valley Townhomes and entered the apartment. Police evacuated the complex and shut off power to the building before busting in and arresting McGee. He’s now in the Linn County Jail facing a long list of charges. Police say McGee was also wanted on a warrant for felon in possession of a firearm.