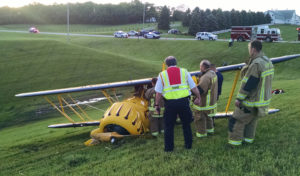 Firemen examine the wreckage of the plane.

Two people were injured when a plane crash landed in a Des Moines suburb Thursday.

Police say the two-passenger plane took off from the Des Moines airport just before 8 p.m. and encountered some kind of problem about 10 minutes later that forced the landing in West Des Moines.

West Des Moines police say the 65-year-old pilot was seriously injured and the 30-year-old passenger had moderate injuries. The two, who have not been identified, were taken to the hospital after being pulled 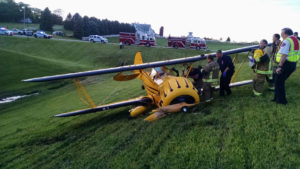 The plane crashed as the pilot attempted to land in a grassy area.

from the biplane by emergency responders.

Police say it appears the pilot was trying to land in a grassy area when the plane crashed. The National Transportation Safety Board (NTSB) and the FAA will be on the scene investigating.