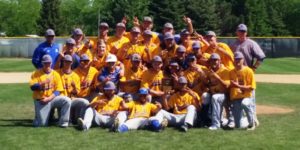 NIACC is headed back to Enid, Oklahoma

The North Iowa Area Community College baseball team is headed back to the NJCAA Division II World Series. The Trojans erased an early 6-0 deficit to beat Dakota County Technical College 14-11 on Sunday to win the third and deciding game of the North Plains District Tournament series.

It is the Trojans’ third trip to the national tournament in four years and they take a 47-14 record to Enid, Oklahoma.

“If we’re built for it, and I think we are, this is the year to do it”, said NIACC coach Travis Hergert. ” We know what it’s like, we’re experienced there, we know it’s a tough draw all around, there’s good teams and you have to play well, and hopefully that springboard’s us into where we need to be and play a long week.”

Iowa Western Community College will head to Grand Junction, Colorado, and the NJCAA Division I World Series for the third straight year after beating Triton Community College of Illinois 7-3 on Sunday in the Northern Plains District Tournament.

Bob Fisher from KRIB contributed to this story