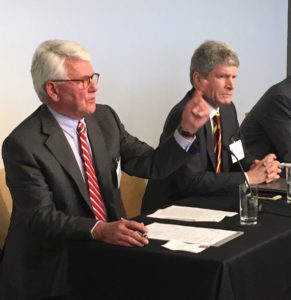 A man who served as President George W. Bush’s chief ethics lawyer is blasting Senator Chuck Grassley for refusing to even have a hearing for President Obama’s nominee for the U.S. Supreme Court.

“I’ve been involved with the Republican Party for many years and this is a disaster politically,” Richard Painter, who is now a professor at the University of Minnesota, said today in Des Moines.

Painter helped Bush get Chief Justice John Roberts and Justice Samuel Alito confirmed to the nation’s highest court. Painter today said it was “unacceptable” for Grassley, during a recent speech, to accuse Roberts “of being partisan.”

“To me, this is highly-offensive and extremist rhetoric and unworthy of a senator,” Painter said. “I think the people in Iowa need to think long and hard about who is representing them in the United States Senate.”

Grassley has repeatedly said he believes the next president should fill the vacancy on the Supreme Court justice.

“That’s an argument that doesn’t make sense in any context whatsoever…this situation that we’ve got right now and the next election and saying: ‘Let the people decide,'” Painter said.

Painter spoke over the noon-hour today at a forum organized by the American Constitution Society. Greg Craig, a lawyer who worked for President Bill Clinton and for Obama during the president’s first term, also addressed the crowd of lawyers. Craig said the political “paralysis” over the courts began in 2009.

“Now it’s become, in the Supreme Court situation, really quite dangerous,” Craig said. “It is no different from closing down the government.”

Both Craig and Painter say it’s time for voters to hold senators like Grassley accountable for the “dysfunction” in government.

Beth Levine, a spokesperson for Grassley, called the sponsor of today’s event a “left wing” group and used the word “discredited” to describe professor Painter.

“As Bill Kelley – who served as Deputy White House Counsel to President Bush – said: ‘Professor Painter did a fine job as ethics counsel in the Bush Administration, but he had no substantial role in the process that led to the appointments of Chief Justice Roberts and Justice Alito.  Indeed, I don’t recall his having participated at all,'” Levine said in a written statement. “Professor Painter’s points have been roundly refuted, including by Justice Breyer who has said the court is functioning fine with eight members.”

(This post was updated at 4:18 p.m. with additional information)