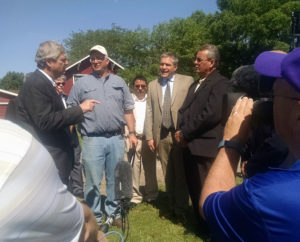 U.S. Agriculture Secretary Tom Vilsack and his Cuban counterpart Gustavo Rodriguez Rollero toured a central Iowa corn and soybean farm today  and talked about water, soil, and energy. Vilsack — with an interpreter behind him — says he wants to see the ban on exports is lifted.

“I sincerely hope that at some point in time in the near future Congress sees the wisdom of ending the embargo — allowing us to have an even closer relationship,” Vilsack says. “In the meantime, U.S.D.A. has authorized the used of commodity checkoff resources for education and training, and we will be continuing to encourage more collaboration. We have a lot to learn from each other.”

Speaking on the farm near Polk City, Vilsack says dropping the embargo would allow Iowa and the rest of U.S. agriculture to send more goods to Cuba. “They in turn have a tremendous opportunity to import into the U.S. organic production. High-value added opportunity. That is why we are on this farm, to show that there is a commitment to organic, but a need for more,” Vilsack says.

“We believe that there are many areas of agriculture that we have common views, and what is left to be done is to deepen our collaboration,” Rollero says. The two signed agreement to work together on a list of agricultural issues.

“And I am certain that this will allow both parties to know each other better, to strengthen our cooperation, and in the end this will be to the benefit of agricultural development,” according to Rollero.

The agreement covers seven areas. “First and most important is the issue of seeds and phytogenetic resources,” Rollero says. “This is the basis for the development of agriculture. There won’t ever be a farmer who can improve his production if he doesn’t improve his seeds.”

Vilsack, a former governor of Iowa, says Cuba is also an ally for the United States on some hot-button international agriculture issues, such as food safety and animal health regulations.

Ken Anderson of The Brownfield Network contributed to this story and supplied the photo.