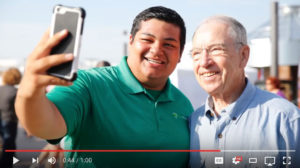 A new TV commercial for Senator Chuck Grassley’s campaign had featured a picture of Grassley posing for a “selfie” with a smiling young man in a green shirt, but that two-second portion of the ad has been removed.

The young man, Jordan Pope of Albia, works on the campaign of Patty Judge, one of the Democrats who hopes to run against Grassley in the fall. Grassley says he had no idea who Pope was or for whom he worked when the picture was snapped last summer.

Judge said during a Wednesday night appearance that Grassley’s staff did not ask Pope’s permission to use the photo.

“In this commercial, he is featuring a prominent Democrat, one who is a county chair, is on the state central committee and is actually on my staff,” Judge said during a forum broadcast on KCCI TV.

Judge indicated Pope was a high school student when the photo was taken and she said Pope was on a trip in Washington, D.C. at the time.

Robert Haus, an official with the Grassley campaign, says the image has been taken out of the ad. Haus says, “We received no complaint, no criticism from Jordan, and the image was a widely distributed image of the Senator and a very happy constituent from the Iowa State Fair.”

(This post was updated at 8:53 A.M. with additional information)