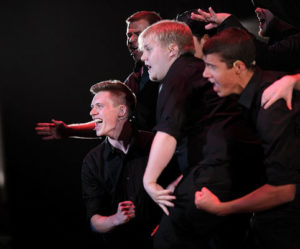 More than 500 students from 34 Iowa high schools are in Des Moines rehearsing for next week’s performance that aims to celebrate the achievements of the state’s top young musical theater artists.

Eric Olmscheid director of programming and education for Des Moines Performing Arts says the students will perform songs on the big stage of the Des Moines Civic Center that they’ve already sung in their own high school productions.

Olmscheid says, “Some of them are full cast excerpts where they’re doing a section of their show from a musical and some of them are collaborative medleys and numbers where students from all schools are in our opening and closing numbers.”

The event is called the Iowa High School Musical Theater Awards Showcase and the top performers will be recognized in what’s considered the Iowa high school version of Broadway’s Tony Awards. The goal of the showcase is to create visibility and support for high school musical theater programs, while highlighting the importance of arts education.

“The program is open to all schools that are 125 miles from the Civic Center so we have a nice representation, of course, from central Iowa,” Olmscheid says. “Beyond that, we have schools from Fort Dodge and Forest City, we have schools from the eastern side with representation from Cedar Rapids and others and then Centerville to the south.” Next year, the program will broaden even further to become a truly statewide event for all high schools in Iowa. On Monday night, students will be recognized with awards in performance, technical and creative categories, plus, they’ll be guided by special visitors from New York City.

“We bring in a Broadway choreographer, a music director, a professional lighting designer, and stage manager that they get to work with for the week leading up to the showcase,” Olmscheid says. “Rehearsals are underway and we’ve been working closely with all of the visiting professionals to curate the showcase.” For some graduating high school seniors, this event will be the last time they’re on-stage, but for others, this will be the launching pad for a great career in performance. The showcase, he says, will cater to both sides of that coin.

“We want to make sure we showcase the best talent in our state but also provide a platform for supporting their work and really thinking about how can we give them something bigger to strive for.” Tickets are still available for the Showcase which is scheduled for 7 P.M. on Monday.

· Grinnell High School – ONCE UPON A MATTRESS

· Maharishi School (Fairfield) – ONCE UPON A MATTRESS