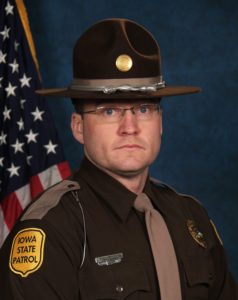 A sergeant with the Iowa State Patrol who was fired for misconduct says an addiction to painkillers cost him his job.

Sergeant Michael Haugen was fired from his position with the patrol’s office in Mason City last month. The Iowa Department of Public Safety had refused to explain his dismissal.

Records show Haugen was driving his patrol car in March when he rear-ended another car in Forest City, but the patrol’s investigation blamed the other driver. Haugen had until Monday to appeal his termination. Instead, he submitted a letter of resignation.

Haugen said he became addicted to opioids after battling chronic medical conditions (ulcerative colitis and C-diff) for more than a decade. Haugen wrote: “my addiction negatively impacted my family, friends, co-workers and others and I’m taking responsibility for my actions.”

It is with great regret that I am resigning from the Iowa State Patrol. This is a career that I aspired to from a young age; I enjoyed serving the public, and will miss it greatly. I am thankful for the opportunity I had making a positive difference for people in our communities, the varied assignments in which I was able to participate, and the bond with fellow officers. With that said, at this point, I need to focus on my health and family.
I would like to use this as an opportunity to build awareness about the opioid addiction crisis in the United States. Each year, 28,000 people die of opioid overdoses. I am fortunate not to be one of them. I became addicted to opioids after battling ulcerative colitis for the past 9 years and C-diff for the past 2 years.
Opioids are incredibly effective at reducing pain…but are also highly addictive and dangerous. My addiction negatively impacted my family, friends, co-workers and others and I’m taking responsibility for my actions. I am moving forward and want to prevent others from going through my experience. I encourage anyone taking opioids for medical conditions to be aware of their addictive nature and to work your doctors regarding the same. I would also stress the importance of friends, family, and co-workers to lookout for signs of dependence on opioids before it is too late. This is a growing epidemic that can be reduced with education and awareness.

Again, thank you for the opportunity to serve this great state.