You are here: Home / Fires/Accidents/Disasters / Semis having trouble in I-80 construction zone 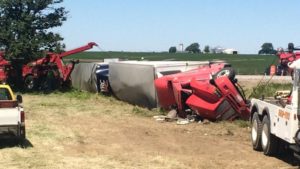 Semi crash, I-80 near Ladora

Traffic safety officials are looking at possible changes to a construction zone on Interstate 80 in eastern Iowa.

Jim Schnoebelen, the Iowa DOT’s District 6 engineer, says around a half-dozen semis have crashed in the work zone near Ladora within the last week. “I can confirm there’s been at least five and maybe as many as six or seven,” Schnoebelen said.

The Department of Transportation is fixing decking on a bridge, which is forcing traffic to use temporarily shifted lanes in both eastbound and westbound directions. The speed limit on I-80 in the construction zone is reduced to 55 miles an hour.

There’s a narrow shoulder in the right lane in both directions and, apparently, it’s causing problems for semi drivers in particular. “We’re looking to see if we may even have some camera footage that would allow us to review the accidents,” Schnoebelen said. “It seems like most of them appear to be (semis) just slipping off the side of the road. I’m not sure about the cause of that…whether it’s just distracted driving or not enough margin of error for the room available there.”

So far, there have not been reports of serious injuries in the crashes. Since there is a narrow shoulder, the DOT installed signs telling truck drivers to use the left lane. “It may be an issue, at times, where trucks don’t have that opportunity to get over to the left lane. So, we’re taking a look at whether there needs to be more advanced warning to make sure they’re aware of that upcoming work zone,” Schnoebelen said.

The construction work in the area started last week and is expected to last until September.