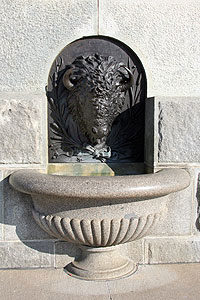 A 400 pound monument that’s been on the Iowa capitol grounds for 125 years is in Nebraska now, but is scheduled for a quick return.

“Tourists came in on Tuesday afternoon a little over two weeks ago and said that the Buffalo Head was coming away from the wall,” Person says.

The Buffalo Head monument is a water fountain, positioned at the foot of the capitol steps since 1892. Turns out all but one of the bolts that had been holding the bronze Buffalo Head were gone and it was hanging perilously off a stone column.

Initial suspicions around the statehouse were that someone had tried to steal it, but Craig Cronbaugh, director of the Legislative Information Office, says once capitol police and groundskeepers took a closer look, thievery and vandalism were ruled out.

“The bolts that held the Buffalo Head on its platform were just old and rusting and one of them finally broke loose and caused the whole head, because it’s solid bronze (and) very heavy, to tilt forward,” he says.

After dispensing a trickle of water for 125 years, Cronbaugh says it seems “natural” a steel bolt might wear out.

“It was getting old and rusty,” he says.

Even though it was hanging perilously, it took a team of four men to completely remove the Buffalo Head monument and lift it into the back of a pick-up. The bronze monument is now being refurbished at a Nebraska firm that’s done work on other statues on the Iowa capitol grounds. The steel bolts are being replaced. Stonework on the column where the water fountain is located is being fixed.

“So it went from: ‘Has this been tampered with by individuals?’ to: ‘No, it’s just a natural process of aging,'” Cronbaugh says.

The goal is to have the monument back in place and the fountain functioning by the end of this month.

Tour guides say it’s ironic the dangling Buffalo Head was discovered by visitors rather than the dozens of people who work in the building every day and pass by the monument without noticing it.

The Buffalo Head was designed by a New York architect and the water from the fountain is “for horses as well as humans,” according to the Legislative Services Agency website.