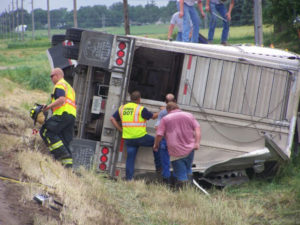 The driver of this semi says he crashed while trying to swat a bee that flew into the cab.

A semi hauling cattle overturned in northwest Iowa and an insect may be to blame.

The accident happened on Highway 75 north of Hinton around 11:30 Monday morning. The truck driver told police that a bee had flown into his cab and he was attempting to swat it when he lost control of his rig. The semi veered off the highway and overturned.

The truck driver, 56-year-old Steven Johnson of Osage, was not injured. The trailer was hauling 40 head of cattle, six of which either died in the accident or were put down due to injuries.

Johnson was cited for failure to maintain control.