You are here: Home / News / Dollars planned for DOT road construction increase, with bridges one focus 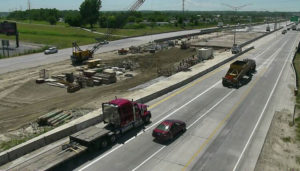 Continued construction on Interstate 29 in Council Bluffs is in the DOT 5-year plan.

The Iowa Transportation Commission approved the annual update to the five-year plan for road improvements Tuesday.

The director of the DOT planning and programming division, Stuart Anderson, says they’ll spend a little more once again this year. He says it’s a $3.5 billion plan, which is a $300 million increase over last year.

“And that increase is primarily due to the passage of the federal transportation authorization bill that provided some additional funding for improvements. And then of course this increase comes on the heels of the program that the commission approved last June which had a $500 million increase over the previous program as a result of the legislative action to increase the fuel tax,” Anderson explains.

A big slice of the money approved is going toward bridges. “About a third of that 3.5 billion is going for bridge improvement or bridge construction across the state of Iowa,” Anderson says. He says the amount of money spent on bridges has steadily increased and the number of structurally deficient bridges on the state highway system has been reduced from 256 in 2006 to 81 in 2015.

They have prioritized the bridges to decide which ones will get worked on first in the next year. “Certainly the bridge conditions plays a role in that prioritization, as does the amount of travel on that bridge and type of travel,” Anderson says. “And also as it is coordinated with other projects — and in different parts of the state that may impact schedule as well. So, it’s a combination of factors.”

The plan adds a new year of projects each year as projects are completed, and some major projects carry over. “The interstate construction in Council Bluffs and Sioux City has been underway and continues in this program. We also have four-lane construction of U.S. 20 in western Iowa in this program, and also U.S. 30 in Tama and Benton Counties. Also, U.S. 61 four-lane construction down in southeast Iowa is included in the program,” according to Anderson. The DOT planners put together the estimated cost of the projects before they are approved by the Transportation Commission. Anderson says they’ve been fortunate that the final bids have been better than expected.

“For the last several years….the bids have come in below the programmed amounts. That has resulted in additional funding coming available for more projects to be programmed,” Anderson says. You can see the complete list of projects on the DOT’s website.