You are here: Home / News / IDP platform calls for getting rid of ‘super delegates’ (AUDIO) 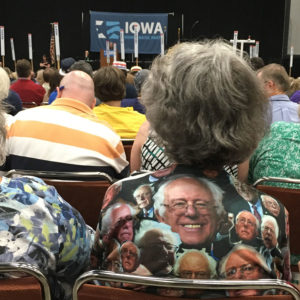 A Bernie Sanders supporter at the convention.

At 10:45 Saturday night, Sanders forces successfully added a plank to the state party’s platform that calls for getting rid of so-called “super delegates” to the Democratic National Convention.

David McFarland of Dallas County was among the Sanders supporters who argued the elected officials and party leaders who are “super delegates” do not represent the will of the people.

Holly Herbert of Polk County and other Sanders supporters have been outraged media outlets called Hillary Clinton the party’s “presumptive nominee” before all the voting in primaries was over because of Clinton’s support from unpledged “super delegates.”

“Even Mrs. Clinton herself said that she appreciated the support, but she still had additional primaries to win,” Herbert said.

Six Iowa Democrats at the state convention each were given a chance to speak for a minute about the issue before a vote was taken. A Clinton backer told the Sanders supporters they were making a “moot point.”

“If we do away with our super delegates altogether, Hillary wins by 400 delegates,” said the man, who did not identify himself. “If we apportion them by primary results, she wins by 600 delegates.”

Emily Legel of Johnson County argued for super delegates, so rank-and-file Democrats don’t have to compete against party leaders for delegate slots at the national convention.

“By abolishing Super Delegates, you’re not giving the people a voice,” Legel said. “You’re taking one additional voice away from an activist who has earned it simply because an elected official, for example Dave Loebsack, has more name recognition than anyone else.”

Sanders supporters complain the 2016 Iowa Caucuses resulted in a near tie between Sanders and Clinton, yet six of the seven Iowa Democratic Party’s “super delegates” say they will vote for Clinton at the party’s national convention in Philadelphia.