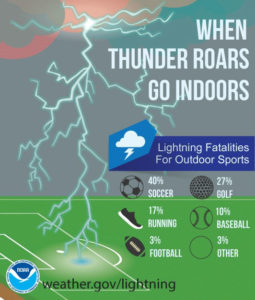 The National Weather Service and Iowa Homeland Security and Emergency Management have designated this week as Iowa Lightning Awareness Week.

NWS Meteorologist Kelsey Angle says lightning is one of the top three storm-related killers in the United States.

“On average of we see about 49 deaths per year from lightning across the United States,” Angle says. “Last year fortunately, that number was lower at 27. But unfortunately, two of those deaths were in Iowa.”

Avoiding a lightening strike is as simple as taking shelter when a storm approaches. “No place outside is safe near a thunderstorm — so when outside, keep an eye on the sky. And when thunder roars, go indoors inside the shelter and that will give you the best protection from the hazards of lightning,” Angle explains. If you are out in the open and don’t have a shelter, you can get in a car.

He says a hard-topped vehicle will provide you protection.

“You should always have someone identified who is keeping an eye to the sky as thunderstorms do approach. And will halt the activity so people will have enough time to seek shelter,” Angle says. “Don’t wait for the rain to arrive — as soon as you see lightning and hear thunder — again you are in harm’s way.” He says players and fans at sports activities out on open fields are particularly vulnerable.

“About 40 percent of lightning fatalities are from people from playing soccer, 27 percent of those from outdoor sports are from golf, and about another 17 percent is from running, ten percent from baseball and about three percent from football,” Angle says. There are apps for phones that track lightning. He says those apps typically use a range of you location and the cloud to ground lightning strikes that have occurred. Angle says they are a help in the decision making process of when to seek shelter. But, he says you should still pay attention to what’s happening in the sky and be “situationally aware” of what is going on at all times when outside with the possibility of severe weather.

A common myth is that lightning victims are electrified and dangerous to approach. This is not true as about 90 percent of lightning victims survive and providing first aid could save a life. For more information, go to: www.weather.gov/lightning or www.beready.iowa.gov.