You are here: Home / Agriculture / Northwest Iowa farmers trying to deal with storm damage to crops 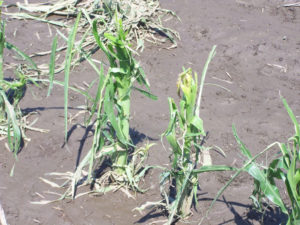 Farmers in northwest Iowa are meeting today (Monday) to assess weekend storm damage to corn and soybean fields. Several acres of both corn and soybeans were severely damaged

from strong winds and hail near Le Mars. Iowa State University Extension Crop Specialist, Joel DeJong says an informational meeting has been scheduled for this (Monday) afternoon. DeJong says its emotional for farmers to see crops damage, but they will try to take the emotion out of it with facts.

“We’re going to talk about the science of growth and development, what the chances for recovery are, how to assess fields for recovery,” DeJong says. He says they will try to help growers make the best decision based on each field. DeJong says they will talk about the yield potential if they replant corn, something he says can be pretty risky to do. They will also try to evaluate the soybeans and try to determine if they can keep the field as it is, or replant it. 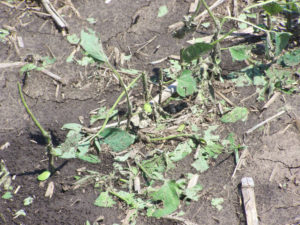 DeJong says his early assessment of some fields found lots of damage. “I’ve been in a couple of cornfields where I don’t think they are going to recover very well at all,” DeJong says, “if this would have happened three weeks ago the chance of recovery have been better because the growing point is below ground. Right now the growing point is significantly above the ground in most fields. And with that much wind with the hail, we bruised the stalk tissue pretty dramatically.”

An area of northwest Plymouth County stretching from Highway 75 heading west to the Plymouth-Sioux County border to the north and then to Highway 3 to the south, suffered damage