You are here: Home / Fires/Accidents/Disasters / Four killed in California fire had just moved from Iowa 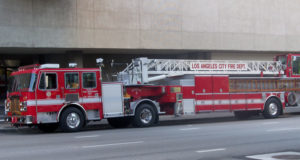 Authorities in California have now confirmed that four of the five people killed in a vacant office building fire on June 13 were originally from the southeast Iowa city of Ottumwa.

According to the Los Angeles Times, Davis and Clemons had come to Los Angeles from Iowa just days before the fire. Davis was joining her son, Joseph Proenneke, in L.A.